Agile management of stocking numbers can work. Are you ready?

In March, various newspapers (both hardcopy and digital), social media, and talk around the Great Lakes centered on the collapse of the Chinook Salmon Fishery in Lake Huron and the very real threat of Lake Michigan following the same dismal path. Conversations at tackle shops and fishing club meetings were of concerns that Lake Ontario might also be sucked into the same vortex that leads into the black hole of salmonless waters. The hype over the doom and gloom reports of the salmon fishery on the upper Great Lakes had many thinking we are next and with this thinking after two extremely tough years (2014, 2015) of lake Ontario fishing, it was like the writing was painted on the wall.

I am a volunteer member of the Fisheries Management Zone 20 advisory council. Essentially a group that work together to communicate the various interest groups around the lake. Geographically, Jerry Mitrovich and I have done our best to extend the interests of the Ontario South Shore angling community, covering Hamilton and Niagara to be specific. Maybe more so, being on the council has allowed a better understanding of the state of the Lake. What we know, what we like to know and what we like to see happen to open water and near shore fisheries are discussed and learned by those on the council. Although the members of council share a variety of viewpoints, when the data shows a significant trend, where a variety of data sources seem to coincide, there is no reason to push individual agendas when we have a very necessary mandate to help manage a trophy salmon fishery and mitigate the risk of any such collapse.

The media and angling community buzz was enough for the council to pay close attention to the issue. Coincidentally Lake Ontario data revealed a troubling change nearly upon us. The signs written on the wall were seen by members of council in 2015, but the angling community still hadn’t seen those signs, it was still early to say for certain where the fishery was heading. Fragile – Yes – but with a warm winter in 2015-16 we had high hopes for a recovery. Unfortunately recent survey data shows we did not see a recovery significant enough to provide us hope. 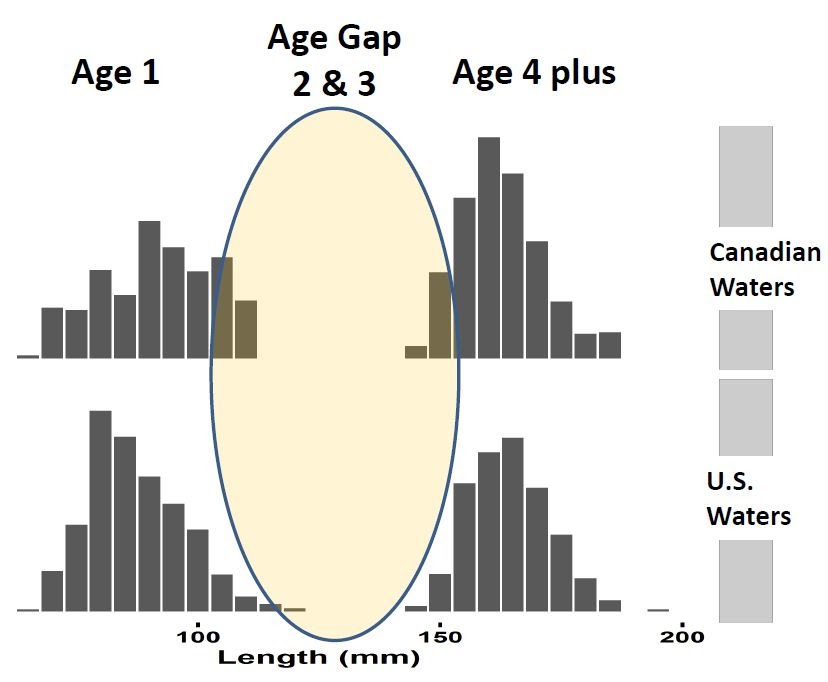 Additionally, the content in the media about the upper Great Lakes were only part of the writing on the wall when it comes to the state of Lake Ontario. The upper lakes mostly struggle with the lack of nutrients and plankton to feed baitfish. Lake Ontario, on the other hand, has more short term concerns related to cold winters in 2013-14 and 2014-15, and the stressed alewife populations with a gap in year classes. Like a car that needs an engine tune up, rather than a full body off restoration.

I am an avid angler with an extreme interest in a quality Chinook salmon fishery but still remain objective on all aspects of a potential decline in baitfish levels, it was absolutely critical not to get sucked into the negative slant the media had played, but also not to take a foot stomping, near sighted “there’s tons of baitfish- I see it on my SONAR – there can’t be a baitfish problem”, stand.

The council continues to be educated on the ecological scenario past, present and future (whatever that might be?). Knowledge is power they say, but it’s not about power, it’s about an understanding and the council requires we work together to abate any possibility of a salmon fishery crash on Lake Ontario. We will soon grapple with what measures we need to take in order to react to changes in predator/prey balance? We need to be agile enough to be proactive instead of reactive. Have trust in the data, the concepts and the idea that a balance of predator/prey is more than an allotment of stocking targets. Make changes ahead of any signs of a failing food web is critical, a lesson we should learn from watching the crash of Lake Huron.

The biggest point of interest to discuss is how we plan to stock fish. Can we work with our neighbouring jurisdiction in New York to find a happy place with not only numbers of fish stocked but how we stock those fish? Not just about acting on increasing or decreasing stocking numbers, instead or also by adjusting the allocation of fish as they relate to the most effective sites and survival rates at those sites. Pen sites vs direct stocking sites vs tributary stocking sites. Some may argue we need to know more to make bold decisions, I think- even if it’s not solid science; I rather do something, and learn from it, then do nothing and learn what we should have done when it’s too late.

Without getting into a great deal of history on Alewife in the Great Lakes and the rise of the Chinook Salmon fishery, Chinooks were likely North America’s and maybe even the World’s largest success story in fisheries management. Projects are often judged by three main factors, Social, Economic and Environmental. Socially, Chinook Salmon are without a doubt the most sought after Salmon or Trout species in the Great Lakes. Economically they generate highest investment over the other Salmon and Trout species. Environmentally, the imbalance in the Great lakes ecosystem in the 60’s with an Alewife population explosion, went through a dichotomy, becoming a relatively stable predator/prey balance once Coho and Chinook salmon stocking was introduced and for the most part remain balanced for the past 50 years.

In the 60’s it was an experiment, in the 70’s the fishery was discovered, in the 80’s the fishery reached an unprecedented flurry of angling attention setting the bar for expectation. In the 90’s the fishery began to turn downward in relation to the expectations set in the 80’s. In turn, this changed angler attitude. Anglers thought stocking numbers would directly correlate to catch rates and a sense of political pressure or measure of accountability towards fisheries managers was the new agenda. Adjustments to reduce stocking numbers to restore a healthier predator/prey balance, was met with angler disappointment rather than a means for providing a balance.

In the 2000’s that same attitude persisted, but the state of the lake and fishing productivity seemed to have rebounded after anglers figured out how to catch more fish using “new age” trolling techniques. 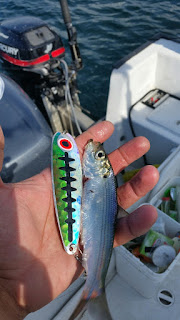 Folks, it’s time to react to change once more. The rigidity of our stocking targets amoungst a fishery that is dynamic and ever changing, doesn’t work. Perfect example is the state of Lake Michigan’s fishery faced with the same sense of rigid stocking targets became a discussion of stocking entitlement rather than truly reacting to a decline in predator/prey imbalance.

The demographics of alewife in Lake Ontario have recently changed. Recent surveys show data that we are not in a great place. Anglers may say they see lots of bait on their SONAR, but having an understanding of what they are seeing might add knowledge to the subject herein. 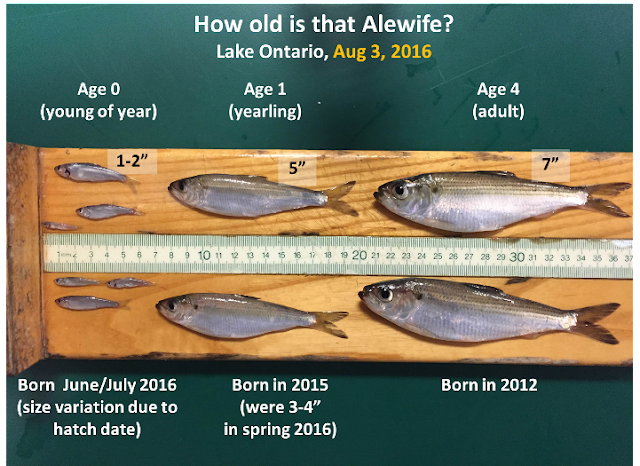 The 2012 year class of alewife are currently what is holding up the existing fishery. Subsequent years of recruitment failed to follow suit with its more prevalent predecessor adults born in 2012. We are facing a two and maybe even three year gap that is very concerning for the health of our alewife population in the near future. The 2012 year class are over their prime. It’s like having no men and women in Canada under the age of 50 and then asking 50 year olds to make enough babies to keep our Canadian population strong. Are you getting the sense of the magnitude of the issue?

Yes it’s an issue but it’s not with certain doom. Unlike the upper Great Lakes the most important factor that will help Lake Ontario rebound is that we have much higher nutrient loads to fuel the food chain. Higher nutrients provides- higher phytoplankton provides -higher zooplankton provides - food for Alewife. If we help the Alewife numbers by reducing pressure from its predators, a recovery can happen. This isn’t the case for Lake Huron and maybe even Lake Michigan as it would be only part of the problem they face. We can make good of a bad situation, but we must be willing to act.

Knowledge is not power in this case, but what knowledge we do have on the topic and how we react to this change, we might come out ahead. What do we need to do- change attitudes about the sense of entitlement when it comes to stocking numbers. We need to be creative and forward thinking, be willing to try even without solid evidence that one stocking technique, number or location be the definitive answer to our problem.

If you were to give up a significant number (maybe even all) of Chinook salmon stocking numbers for 2 years knowing your catch rates will drop dramatically for the following 3 years as a sacrifice made in order to mitigate the risk of any such collapse, would you do it? Short term pain for long term gain?

You can point your finger and demand to see evidence, but as my mom would say, “ you point your finger and there are 3 others on your hand pointing back at you.” Don’t hold grudges over who gets what and how much, change your sense of entitlement. If the writing is painted on the wall, saying “Enter the black hole leading to salmonless waters here”, why not paint over it?

Posted by FINtastic Sportfishing at 12:00 PM